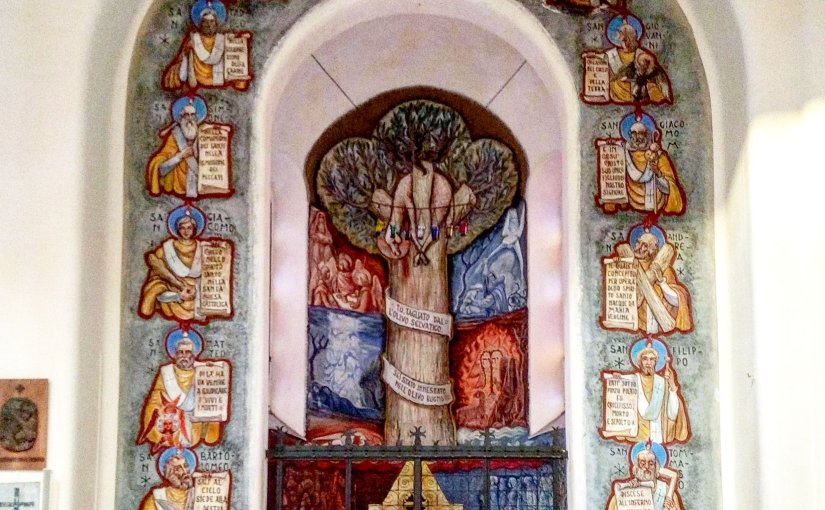 If you liked the first post, “What can we see in one day?” which centered around some of the most popular sights & sites featured in the movie Roman Holiday, you might want to venture to another of the 7 hills in Rome, Aventino, just a stop or two past the Colosseum stop on the Blue or ‘B’ line of the metro.

Note: Don’t be afraid of taking the metro or bus.

Let’s assume you are staying somewhere near the main train station, Termini; if you aren’t, you will want to know how to get there for your other train rides. Rome only seems to have two main train lines, the ‘A’ or the ‘B’. It’s really simple and easy to use.

Take the ‘B’  towards Laurentina. This ‘B’ line or Blueline heads towards a great little shopping neighborhood, Cavour, then on to the Colosseo (Roman Colosseum), then Circo Massimo (Circus Maximus). Get off here at Circo Massimo for a lovely walk around this ancient chariot track.

Look up at the ancient ruins of the Flavian palace, which was destroyed by fire, flood, and demolition. I highly recommend taking the time to imagine chariots racing around the track 7 times while an emperor looks down from his lavish viewing area — the palace, on Palatine hill, was very grand in its day and is simply huge. Circus Maximus is in the valley, then there is Aventino hill.

On the opposite side of Circo Massimo is the monument, Roseto di Roma Capitale. There you will find a street that will take you up into the Aventino neighborhood, look for Via di Valle Murcia, and head up the hill. You will walk near the walls on your right and find the Giardino Degli Aranci, a quiet small park with an incredible view. We happened on an open-air piano performance here, with families and their children relaxing on a Sunday afternoon. This has medieval architecture and is leading to the next building, the Basilica of Saint Sabina, the mother church of the Dominicans. This church is unique because of its simplicity and selenite windows (as opposed to stained glass).

Next to the Basilica of Saint Sabina, is a Basilica that is closed to the public, and owned by the Priory of the Knights of Malta. Did you know that the Knights of Malta are the oldest surviving chivalric order? Read more at https://theculturetrip.com/europe/italy/articles/the-story-behind-the-aventine-keyhole/

Now next to that is… the Keyhole of the Knights of Malta — a small viewing portal in a gate in the wall that aligns perfectly with a view of St. Peter’s Basilica. Read up on the Knights of Malta, the crusading knights founded in Jerusalem in the 11th century while you are waiting in line. Expect to wait in a line, donate a little, and spend a couple of minutes enjoying the view. For some, it’s underwhelming, for others, it feels like being transported back in time. For your wait, there is a snack vendor and your fellow folks waiting in line — interesting case studies in modern culture.

Take the Via di Porta Lavernale, all of the way down the hill to catch the tram, the number 8, heading across the river over into Trastevere. Since I can’t tell what time you began this day, I am hoping that it’s lunchtime — so here is one of my tips for a great restaurant for lunch in Trastevere. It opens at noon and it doesn’t have an Italian name, but it is great for those who love Carbonara done several different ways, and done better than anything you can get near the Spanish steps.

The restaurant is called ‘Eggs’ and you will have to use your map to find it — it’s close to the Trastevere Mastai stop (first stop across the river).

Have lunch, wander around, then head back on the tram and get off at Marmoratta and walk toward the ancient Pyramid of Caius Cestius. There is also an old protestant cemetery if you are in the mood for wandering around, looking at headstones. This is right in the walls of Rome. After exploring, head to the metro station. This is the Pyramide stop, which is the stop just after the Circo Massimo stop you got off to see Circus Maximus. Keep heading towards Laurentina for two stops and get off at the San Paolo stop. Cross a street or two to get to the Basilica Papale San Paolo Fuori le Mura, the Papal Basilica of St Paul outside the walls. This church burned down and has been restored. Some of the most amazing alabaster windows can be found here as well as a stunning mosaic. Part of the old, original doors are still there, inside and the folk art feeling of the ornamentation is informative of the period.

Head back to the station and decide if you are ready to go back to your room for some rest before a late Italian dinner. Now that you know how to get to Travetere you can make reservations or add a little more to this itinerary to stay over on this side of town.

Back near the tram is the Testaccio neighborhood, with a farmers market, two piazzas that are mostly used by locals and a church that isn’t always open, Santa Maria Liberatrice.

A local Roman has recommended a restaurant in the Testaccio neighborhood, Felice, as having the best Caccio e Pepe — the Roman pasta dish that is simple and eponymous.

I hope you enjoy this sample itinerary of seeing some other Roman spots!